The 2023 Kastner Cup is coming to Road America. The Kastner Cup will be the featured marque of the 2023 WeatherTech International Challenge with Brian Redman. One of the largest vintage race car gatherings in the United States, featuring over 50 classes of cars racing in several groups, The WeatherTech International Challenge with Brian Redman will return on July 13-16, 2023. A mid-summer classic including everything from a special Concours on Friday and Saturday along the streets of Elkhart Lake and a special Triumph sports car racer reunion makes the 2023 event a can’t miss spectacle for any racing enthusiast.

The 2022 Kastner Cup was held at the Historics at PittRace, in conjunction with the 40th annual Pittsburgh Vintage Grand Prix, America’s longest running vintage street race. Thirty six Triumph powered cars took the green flag and raced for the glory. The race was won by Christian Marx who flew in from Germany to drive the TR8 owned by Peter Bulkowski. Finishing second was Sam Halkius in a TR6, and Joe Carr rounded out the podium in the Huffaker TR8. The Kastner Cup was awarded to Henry Frye, who finished 4th in a TR250.

Race results can be found here.

HISTORIC RACING AT ITS BEST

2022 will mark the 20th running of the Kastner Cup. The race will celebrate the 70th year of Triumph sports car in competition. The Kastner Cup was named in recognition of the career accomplishment and legacy of R.W. “Kas” Kastner who passed away on April 11, 2021 at the age of 92. Kas Kastner was one of the most influential individuals responsible for the racing success of Triumph sports cars from the late 1950’s through 1970 and beyond. To this day, his series of Competition Preparation Manuals are a must read for competitors in Triumph sports cars. Later in his career, Kastner directed the Nissan IMSA GTP team that won the manufacturers’ championship three years in a row and the drivers’ championship four years in a row; a remarkable achievement.

ABOUT THE KASTNER CUP

The Kastner Cup has become a major event on the vintage racing calendar for British car fans. The race is held at a different track each year to provide Triumph racers across the country a chance to compete for the Cup. Open to race prepared Triumph powered cars, the Kastner Cup is awarded to one competitor based on the following criteria:

The Kastner Cup is organized by members of the Friends of Triumph (FOT). FOT is a group of vintage racers dedicated to preserving the racing heritage of the Triumph marque. Campaigning these automobiles on the track is at the essence of why FOT was organized. The 2022 Kastner Cup Race Committee is chaired by Curt Johnston. Grand Marshall of the race will be Robert “Bob” Johns who was a Triumph works driver, including stints at the 24 Hours of LeMans and the 12 Hours of Sebring in the ’60s. 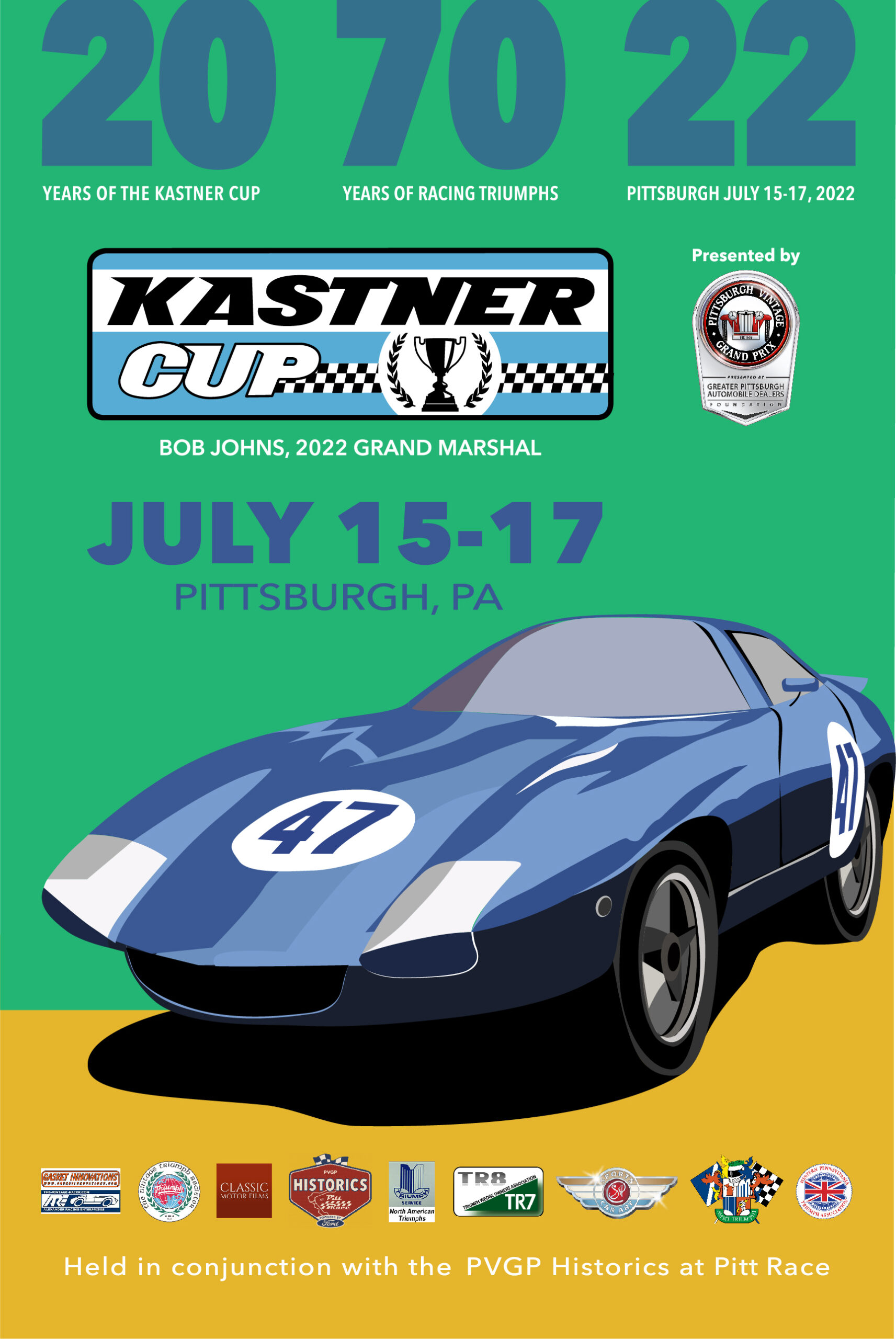 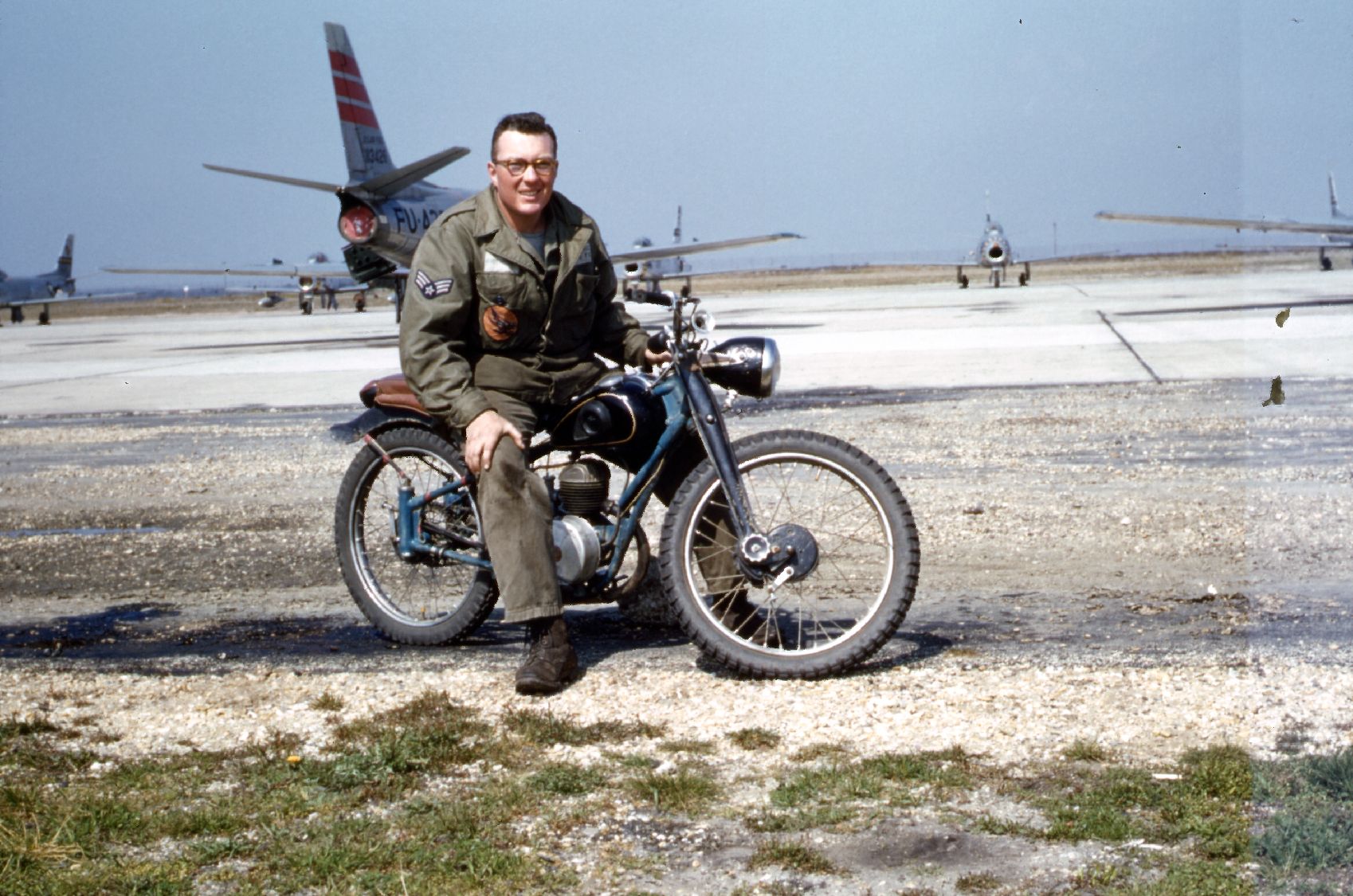 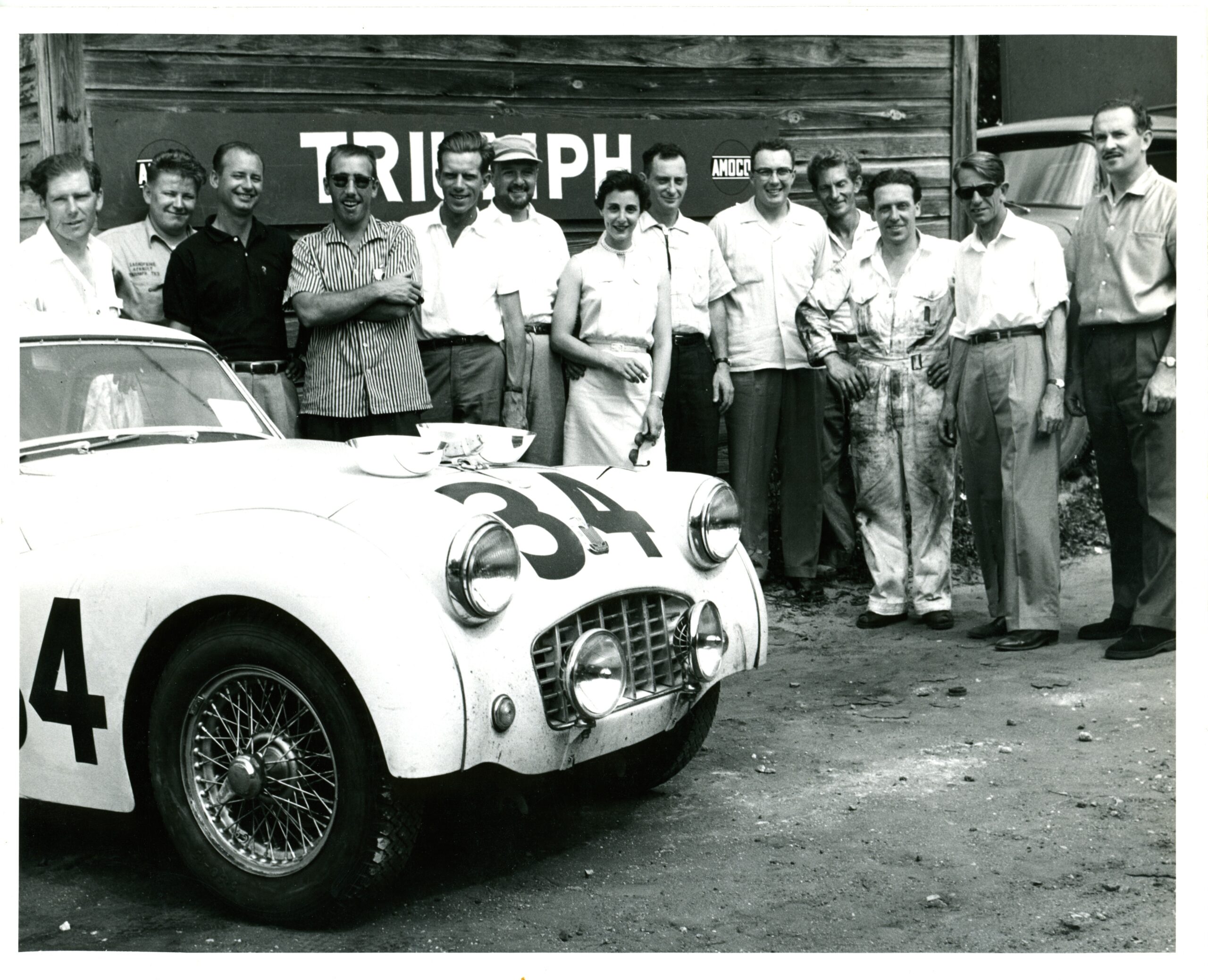 Bob brings knowledge and experience with him to the 2022 Kastner Cup and as Grand Marshal, will allocate the Peggy Kastner Performance awards to each top-performing model of Triumph and will take up R.W. “Kas” Kastner’s role of choosing the Kastner Cup recipient. His decision will be guided by Kastner’s original outline – 50% based on performance, 25% based on presentation, and 25% based on enthusiasm for vintage racing.

While serving in the Air Force beginning in 1952, Johns had the good fortune to be stationed near one of the greatest  race tracks in the world, The Nürburgring. Compiling an enviable record in the European motorsports world during his three year stint with more than 25 events, Bob scored several important victories including first place finishes in the Eifel Motor Sports Club’s annual lap times (Nürburgring  course), Landstuhl Air Force Base Road Races, and the Sembach Air Force Base Road Races.

Back in the United States with a strong endorsement from the Triumph importer in Germany, Bob obtained a racing license from the SCCA and continued his racing.  He had two second-place finishes at the Fort Sumner races.

Discharged from active duty in 1956, Johns was contacted by Alan Bethel, President of Standard-Triumph  USA.  Bethel was assembling a team for the Triumph factory to compete in the only International Sports Car Race in the United States at that time, the 12 Hours of Sebring Endurance Race scheduled for March 1957.  Bethel offered a place on the team and Bob accepted.  In the end, Johns finished 1st in class and 19th overall.  He retired from racing soon after.

Bob Johns was inducted into the British Sports Car Hall of Fame in 2017. 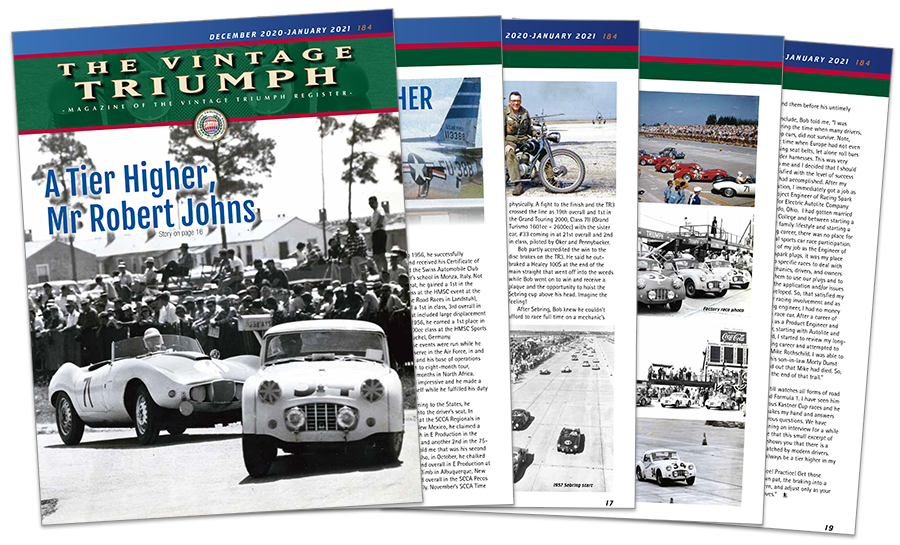 The 2021 Kastner Cup was awarded to Jeff Quick of Kent Washington. Mr. Quick drove his beautiful 1967 TR4A. He was also awarded the Peggy Kastner Performance Award in the TR4 and TR4A Class.

Thank You To Our Partners 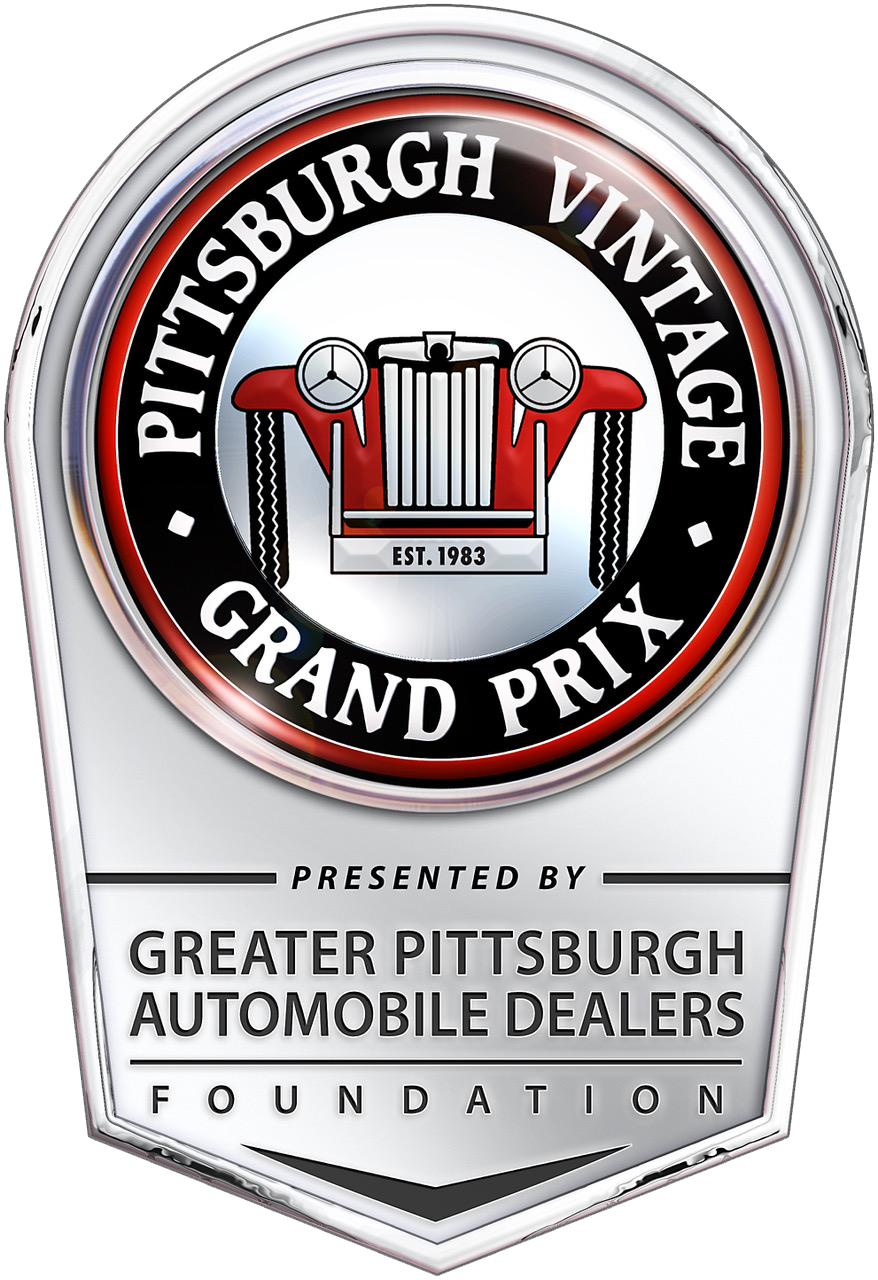 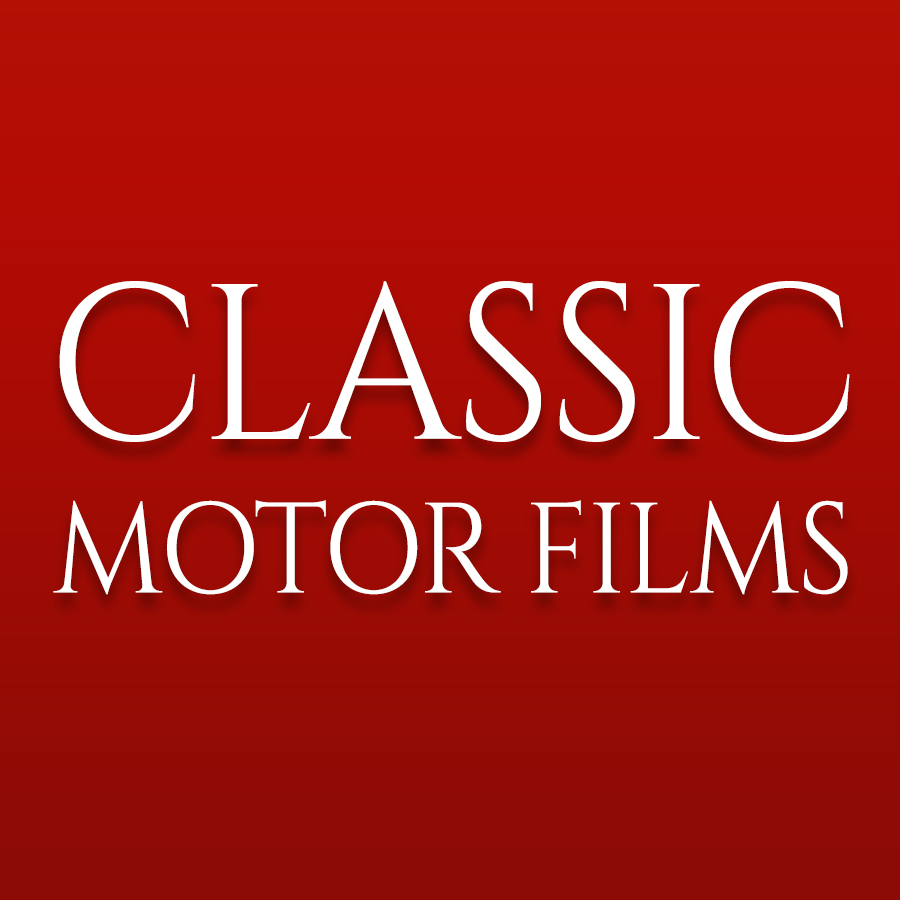